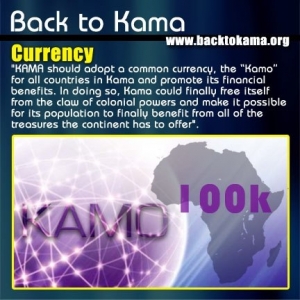 Demand financial compensations For a financial compensation for the victims of slavery August and September 2001 The compensations (requested by the RADDHO association within the framework of the conference of Dublin on racism and xenophobia) must be paid to the direct descendants of the victims of slave trafficking and not to African nations… These descendants of victims are in the countries which have built their fortune on slave trafficking, particularly the United States, France and England.

Furthermore, compensation should be paid by the countries which have allowed slavery and collected taxes due to the work of the slaves. To distribute this capital to the African countries would mean that those who escaped the slavery deserve compensation while the descendants of the true victims would have nothing… It is necessary to reopen the books of history and the statements of the economy of the colonizing superpowers of past to show the exact amount of fortunes engendered by this crime.

And the descendants of the culprits of these crimes should see all their fortune coming from this criminal past seized, like for the criminal Nazis, because it is not different. Crimes against humanity are known to be very difficult to prescribe. In this case, the crimes of those who have killed hundreds of thousands of Africans and doomed to slavery millions of others, and which rank as crimes against humanity, must find the States guilty of these crimes, judged and condemned to consequently pay damages to the victim's descendants. It is aberrant for Germany to continue to pay damages to the descendants of the Jews victims of Nazism and for Africans not to have the same rights. The countries that have made their fortunes upon this despicable act, known as slavery, have a moral obligation to pay damages to the victim's descendants.

The huge fortunes that have been amassed upon this abominable trafficking should be returned in full to the victim's descendants plus a sizeable compensation not only from individuals but also from the States that have benefited from it. The families that have built their empires on cotton, coffee, sugar, etc.., during the slavery era should have their goods seized in their entirety and redistributed to African Americans, the descendants of slaves, in addition to the total amounts of money that governments have cashed in, thanks to the enormous taxes on profits made from slavery, as well as interests. African Americans should, in fact, have at least half of the U.S. goods redistributed to them - if real justice existed – because they have contributed to building this country more than anyone else instead of representing 70% of the jails population (which is over 6.5 millions) because they live in poverty..."