Africa needs no god but spirituality 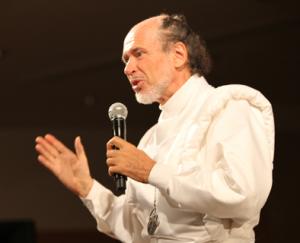 Dechristianization and to regain Kama religious and spiritual identities Remarks made in Brazzaville 13th December 2001 (...) Any African worthy to be called African does not have the right to remain Christian. What is Christianity? Oh!, I do respect Christians... when they stay at home..., that is to say in Rome..., that is to say in Europe. But here you have been converted by force. Your ancestors were converted by force... To be Christian when you are an African is to betray your ancestors. Become Raëlians! I will launch a big apostasy campaign. I hope you will apostatize from the Christian religion, because it is the religion of the colonizers, the slave owners who have looted, stole and abused you and continue to do so. If you abandon the Christian religion you can choose to become atheist (it’s your right), or nothing (you are not obliged to become Raelian), or you may become Muslim (because this at least is not the religion of your colonizers), whatever you may like, everything except Christian. Because to be Christian, is to send an insult to your ancestors who have suffered, who have been converted by the use of the stick, and whose children were taken away from them in order to put into schools by force. This is what it is to be a Christian! How can one be Christian and African? This has always surprised me! This is because you say to yourself that the “whites” are superior... No, this is wrong! Stand up! Be proud, be great, be yourself! There were many local religions in the past, in your cultures which the colonizers, in their big disrespect of your cultures have called animist or primitive religions. Find your roots and go back to them while embracing the sciences of the future which will make you, not equal, but superior to your ancient colonizers.