From the return to the Kamit Diaspora 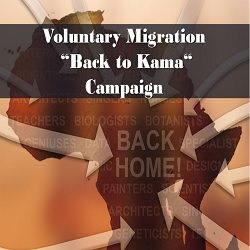 A call for a voluntary return in “Back to Kama”, mars 2009 Launch a major migration campaign for the return to Kama (voluntary, that one) in order to transfer to Kama the knowledge and the wealth rightfully accumulated in America by the elites from the Kama slaves descendants. This will further weaken America that is currently facing the worst economic crisis in history, bringing down all other former colonizers countries or slave masters. The right punishment! Economic and financial incentives to return In "Back to Kama " , March 2009 ( .. ) You need some sponsor of the project "Back to Kama." If black artists like Michael Jackson or other transfer their recording studios and their main residence in Kama, many will follow. It is necessary to attract these fortunes and those celebrities that Kama governments have the courage to offer incentives package to return back to Kama. In particular, financial incentives, exactly as Ireland did; Europe poorest country, Ireland, which became the EEC countries at the most rapid economic development. These incentives are extremely simple: a guarantee for all immigrants returning to Kama or originated from Kama, a total income tax and capital tax exemption for at least fourteen (14 ) years. In addition a banking secrecy guaranteed by law and with heavy criminal penalties for employees betraying banking it. Furthermore a total exemption of taxes for the American companies owned by Kamit descendants moving their head office and production tools to Kama in free zones trade created specifically for this purpose. If the idea for super stars ok Kamit origin as Michael Jackson or Oprah Winfrey, a return to Kama, is emotionally exciting, it is not enough to encourage them to move. Money, yes! If, again, artists and public figures such as Michael Jackson and Oprah Winfrey, heavily taxed in the U.S., know that they will no longer pay any tax if they return to Kama , then they will not hesitate one second. And with the crime committed against former slaves and centuries of suffering and discrimination, the U.S. authorities have no moral right to condemn this migration to evade taxes of former slave who were never properly compensated their descendants. This legitimate tax avoidance would be a fair compensation for the descendants of slaves that nobody would have the right to challenge. With all these incentives, it is no doubt a massive return would take place. We should add a request to the U.S. authorities to release the imprisoned Kamit descendants in the USA and in some states, they represent up more than 50 % of the prison population, if they agree to leave to Kama; this, along with a financial assistance. The timing is perfect because with more than seven ( 7) million prisoners , America is the country where there are more prisoners and the government is no longer able to finance their detention. Immigration policy for the United Kingdoms of Kama Entry and residence visa in Kama: Reciprocity law Refusal of France to grant visa to Africans, October 2004 What is France, otherwise a former Roman colony, which has never carried out decolonization and is even proud of its Latin roots which made it forget and deny a totally different, original, and tolerant Celtic culture which was much closer to ELOHIM (and African traditions). Finally, the contempt of the Frenchmen and their authorities who represent them so well, in the name of their so called culture, for all which is not Judeo-christiano-white, reflects their profound condescension for all the other cultures, religions, traditions and races. This is valid for all the so-called European civilizations and their descendants of the American, Australian or other colonies, created short of genocides for whom all the others can only be barbarians. And therefore, one can colonize or convert, which is a spiritual colonization, by pleading either "to calm" them, or to bring them the benefactions of the "civilization" (pretending so that only the civilization ofWhites deserves this name) or in a more modern way, of the democracy, as the American imperialism in Iraq and in Afghanistan pretends. There were, to my knowledge, never, among the non Judeo-christiano-white peoples, criminal barbarians elected democratically as Adolph Hitler creating extermination camps or as the American Presidents, deciding without care, to kill, with a single bomb, 300,000 innocent civilians (and non whites of course… this same atomic bomb has never been used against the Germans) during the nuclear bombardment of Hiroshima. No king or no emperor of non Judeo-christiano-white people has as much blood on the hands as the biggest criminals, fruits of the sacrosanct democracy. To have a visa refused by France is almost a reference... It will be necessary for the African peoples to remember it and, by reciprocity, not grant visas to the French leaders, when they will have found their true independence and will create the United States of Africa, and why not the non Judeochristiano- white United States. A union of the "barbarians", in a sense, which will show, that really, the true barbarians are those who colonize, whether this colonization is military, political, economic, cultural or religious, by imposing their standards on the others by use of force. The world revolution of the non Judeochristiano-whites will not be the triumph of the inhumanity, but, on the contrary, its disappearance and the return to a true dignity of all the oppressed who make sometimes the error eventually of believing in their inferiority. Then, if the Judeo-christiano-white barbarians recognize their crimes of past, apologize for them sincerely and pay damages to their victims, whether they involve plundered countries or descendants of the enslaved or decimated peoples, it will be then good to forgive them and to grant them a visa... Law of return to Kama of its diaspora in Back to Kama, mars 2009 Finally, as Israel, the states of Kama should pass a law authorizing the return descendants of slaves to automatically obtain the nationality of the country of their ancestors.