Importance of Science and Technology 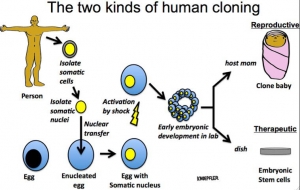 Remarks made in Brazzaville, 14th December 2001 (…) Many people in the world are now shocked by the cloning. Yet the cloning is so simple: to take some cells and make them become other children is nothing. But soon, very quickly we will be able to do like the Elohim. We will take a little bit of all chemical products contained in a handful of soil, because as the bible says, in a handful of soil there is all what is needed to create a human being: we find all the elements of the table of Mendeleiv, everything is there, and that is what is in us; that is what we are made of, in addition of water. Take a handful of soil, put it in a container with a bit of water, this is just about almost a man, some people are no more than that, some politicians for example ! But if you add the genetic code, the spirit, the knowledge, this becomes a human being, or a cat or an earth worm, but it becomes a living thing. Soon we will know how to do it very quickly and even more people will be shocked to see that we become capable of going in the garden to take a handful of soil and create life not from manipulating the genetic code from an ovum or a spermatozoon or the nucleus of a cell, but just simply with rocks to see life appear.

That’s what the Elohim did when they came on Earth; it will shock even more all the conservatives who are already saying today, when one talks a bit about cloning: “what a horror! How come?! This is dramatic, it is scandalous”; life from a handful of soil, this will be even worse for them. I can see some young children in the room, it is a must that these young children do what they like, develop their love for science, for knowledge, it is so important; and this knowledge should not be reserved to a racist elite, that is to say to the populations of Northern countries, of Western countries; you have the same right to it as the others. I spent this night dreaming, thinking of you. And I was telling myself that, it takes only a few inventors in the humanity at the right moment, at the right place, or at the wrong moment at the wrong place, to have some populations develop themselves more than others. It takes only a little to have that. White peoples believe that they have invented everything; when one thinks of it, it is little.

That’s why I was telling you yesterday to have no complex of inferiority toward the whites. None. You are capable of doing, not as well... but better than them. The Whites think for example that, among other things, they have discovered the paper. The paper was invented by Chinese well before the Whites.

The Whites believe they have invented the gun powder, if I may say, it is known that this also comes from the Chinese. The Italians believe they have invented the spaghetti, it is known that this also comes from the Chinese again. Many things the Whites are sure they have invented come from the Chinese. The wheel, it is not sure that it comes from the Whites. And there are many things like that which are just illusions. In fact, on should realize that all what exist has not been invented, because all what has been invented existed before elsewhere. It just took an opened eye to see; whether it is the genetic code, the atom, the iron, the wheel, it existed before it was discovered. Gun powder and electricity existed before they were discovered. What it only took was to have people who were good observers and who wanted to reproduce what was observed.