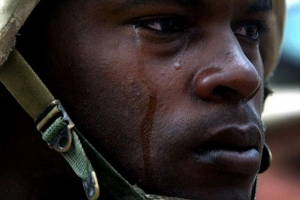 In Interview given by DRTV de Brazzaville, le 3 janvier 2006

So we would like to talk about men but about the African man, about the man of the world, people talks about him; but, we want public authorities, authorities, African decision-makers. What messages do you have for them? It is a message of peace and love. Always! Because it is the only solution! By the force, by the army, one can not obtain anything. "The one that lives by the sword, will perish by the sword" it is written in the Bible. " The one that lives by the violence will undergo the violence ". So, the only way of saving world, is by love, by nonviolence, by demilitarization.

They will move into this international army of preservation of peace which constitutes a sort of police of maintenance of law and order (…) which will prevent the strongest from dominating the weakest. But nationalist armies have to disappear. It is the United States of Africa, there will be an African multinational force composed of militaries of all countries. In the same way, the politicians have to unite. The African states, as they are now, are states made by the colonizers. It is Frenchmen, Belgians, and English, who sat at a table where there was a map: They drew lines: "Hold, you England, take this; you Belgium, take that… ". And there are always the same borders which are completely absurd, that is why I like very much Tiken Jah's clip which says: "They shared the world, nothing more amazes me ".

They shared the world, cut ethnic groups, cut groups, cut empires and cut African kingdoms, to create artificial states which absolutely have no meaning. Results: the genocide of Rwanda, people who are forced to live together, who are cut out of their roots and out of their village and traditional links.