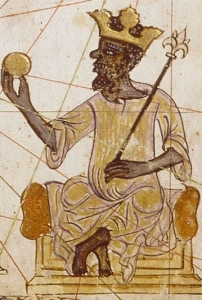 in ‘‘How to make your country or ethnic group independent and successful’’, September 1995 In this world economic war, the absolute weapon is the human weapon. A winning country is a country that provides its best soldiers with means to operate to the best of their capabilities. It is also one that attracts the world's best among its troops and makes them leave their birth country to become, in a way, mercenaries.

Who are these mercenaries? They are people who have a significant wealth, be it in the form of knowledge they can transform into tradable goods or services, or in the form of capital allowing them to create businesses able to export goods or services. Knowing how to use this most important raw material in the world i.e., these exceptional human beings, so that they leave their birth country (if they still live there, because in general they have already migrated to countries that enticed them) to be at the service of another community is the challenge.

These exceptional human beings must be enticed and rewarded so that they will emigrate without any regrets, or must be given more if they hesitate. This wonderful inter¬national competition, which is already in place to appeal to the best, is a vital natural selection and advantage for all human beings. Populations that are crushed by income taxes lose all their vitality and have a tendency to decline into a state of assistantship that, sooner or later, leads to collective impoverishment. Hence, societies that bring their members the most joy thrive, while those that don’t end up fading away just like the ex-USSR.

Certain countries have managed to take advantage of this known international competition even if, today, it is more challenging than ever. The reason Switzerland and the Netherlands’ are so wealthy is largely because these two countries knew how to attract and welcome the wealthy Protestants that were prosecuted by the power of the Catholic Church during the wars of religion.
The solutions already exist to make your country or ethnic group independent and prosperous. For this, it is necessary to implement policies that have already been tested in many countries and that are totally risk-free. We will now see what these solutions are.
Firstly, let us look at the Swiss model. This is a very mountainous country which, up until the last century, was essentially made up of small farmers living thriftily from a mountain economy. Then, it suddenly became one of the richest countries in the world simply by establishing a banking secrecy that still attracts capital from all over the world and shelters it from increasingly steep income tax. Before going any further, it is important to clarify that income tax has been implemented in most countries of the world only since the First World War, that is, between 1900 and 1920. Few people remember this. Previously, the government revenues came from various consumption and property taxes.

When this organized swindle, called income tax, was established at the beginning of the century it may have penalized society’s most productive individuals but the most intelligent ones simply forwarded their capitals to Swiss banks.

It is extremely easy to implement a banking secrecy. Billions of dollars will then very quickly flow into the bank accounts of your country. And this is not "dirty" money. Throughout the world, there are several hundreds of billions of dollars, called floating capital and belonging to honest people, that legally move from one profitable financial institution to another and that escape from the burden of income tax. Almost every country considered a banking paradise, such as Switzerland, has implemented controls and legislation that prevent drug dealers and other criminals from taking advantage of this system. In general, banks refuse cash deposits and only accept wire transfers from other banks. This way, money laundering becomes impossible. It is important to point out that the banking secrecy, which prevents any fiscal authority from having access to the banks’ bookkeeping, exists in many countries other than Switzer¬land, such as, Luxembourg, Jersey, Austria, the Baha¬mas, Liechtenstein, the Isle of Man, and Russia. In many of these countries, when a bank customer is being prosecuted for criminal affairs, an examining magistrate can lift the banking secrecy. As a result, international organized crime cannot take advantage of the banking secrecy protection. The influx of capital to your country would be immediate if the banking secrecy were to be implemented. Within a few days, hundreds of billions of dollars would strengthen your country's economy without any problem and within a few months, thousands of jobs would be created in financial institutions.

The second great decision a vigorous government could make should be to create two free trade zones, such as those that currently exist in Geneva, Switzerland, and Ireland. Free trade zones are special customs areas with favorable customs regulations (duty-free) for foreign companies that decide to build factories or offices there. These zones are totally separate from the rest of the territory and access to them is through customs’ duties. It is actually an industrial zone that is administratively not considered to be part of the country where it is located. A few years ago, Ireland also had to deal with an unemployment rate that was over 30% and decided to create a free trade zone. Companies from all over the world swarmed in and, as a result, tens of thousands of jobs were created.

The third solution, which was implemented by the Netherlands, is a total tax-exemption for revenue coming from royalties paid on invention patents. Hence, inventors from around the world create companies in land that take advantage of their patents, thus creating jobs and other influxes of currencies. This concept can be applied practically anywhere.

Finally, it is very important not only to attract capital but people as well. These are the generals of the non-violent army in charge of fighting for your country in this world economic war called the new anti-unemployment mercenaries. How can a country attract mercenaries? By giving them financial benefits. Since the end of the Second World War, Austria has granted a total tax exemption on foreign income to all foreigners who decide to become permanent residents. Ireland, Costa Rica, and the Cayman Islands give the same tax exemption to artists.

But perhaps a more radical solution should be considered: the total abolition of income tax. As seen earlier, this unfair and anti-productive income tax is a very recent invention. At first, it was only established as a temporary measure to help countries get back on their feet after the First World War. It was only 3 to 5% at that time but swelled up disproportionately to reach record highs of more than 55% in some countries, such as Sweden. This country ultimately saw its elite and capital flee the country and, as a result, it is now backpedaling. Even in the United States, a well-known political party has recently advocated that the income tax be abolished and replaced by a consumption tax.

Income tax heavily penalizes the economy. Let us compare two people with the same salary. One of them puts money aside in order to create his own company while the other spends everything he earns each month. Both must pay 40% tax on their earnings. For the one who spends everything he earns it is no problem because he spends everything he has left anyway. But for the one who wants to start his own company and create jobs, it slows down his projects considerably. If he needs a starting capital of twenty thousand dollars, he will need almost twice as much time to succeed because of this income tax. Those who are unemployed will have to wait twice as long. This income tax penalizes those who want to create companies and jobs, and favors those who consume without caring about the economy.

A consumption tax, on the other hand, is very effective and can generate markedly superior revenues. Some claim that a consumption tax penalizes poor people and favors wealthy people. This is false because wealthy people spend more and, therefore, pay more sales tax. Furthermore, in order to help the poorest people it would make more sense to have a full tax-exemption on essential products, such as bread, rice, bananas, manioc, meat, eggs, etc. This tax-exemption could be limited to staple foods produced in your country and it would help local farmers and producers of meat, rice, bananas, maniocs and breads, etc. Another benefit from the abolition of income tax is the removal of a large number of civil servants in charge of collecting this tax. In certain countries, the cost to maintain the salaries of these civil servants and the premises necessary for carrying out their work is over 50% of the amounts collected! By contrast, the fiscal services in charge of collecting the consumption tax already exist and do not require any additional work force, whether this tax is 7.5 or 15%. Also, products that are harmful to the population's health and that are largely responsible for the shortage of health insurance should, wherever they exist, be heavily taxed, possibly by more than 100%. I am referring to tobacco, alcohol and coffee.