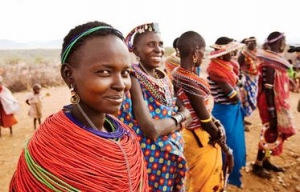 Intervention in Accra (Ghana), December 2004 I remember this member of the Parliament I do not recall from which African country, who was refused access to Parliament because he was wearing the traditional dress. It is Kenya. Your traditional dresses are much more adapted to your climate and they are more beautiful than the European suit and tie, with this thing dangling. So, he was not allowed to enter Parliament where everybody was wearing the English suit. It is monstrous, it is denying his culture; it is denying his traditions.

In « Assessment of the 50 year independence of Kama », interviewed by DRTV of Brazzaville the 14th November 2009. (…) The only solution is the return to pre-colonial borders, to pre-colonial traditions, and to everything that was there before, including the way to dress. When I see African presidents and ministers dressed with the suit and tie of the colonizers, their ancestors must be pulling the little bit of hair they have left and feel betrayed! These ministers dressed in a suit and tie must go back to the traditional African outfit. Why copy the blood-thirsty colonizers who came to pillage Africa to take their resources and reduce people to slavery? It is treason that African presidents and ministers who are supposed to be independent dress like Europeans. They are traitors to Africa when they copy Europeans.

There are a few African leaders who have the courage to dress in an African fashion. All the others are traitors to their culture. One could have the false excuse those ones dresses like foreign visitors to please them. But I have never seen the French president or the British prime minister dress in an African manner when African heads of state come to visit them in an effort to please them! So this is a double standard.