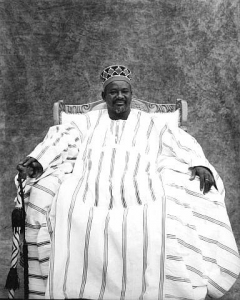 Remarks made in Accra (Ghana), December 2004 Kings, traditional leaders, leaders of ethnic groups, they have to take their place back as Uriel said, whose ancestor was a Katanga emperor and I hope I support him anyway, in his fight to rebuild the state of Katanga.

A president elected for 4, 5, 7 years. What is he looking for? … To become as rich as possible by placing his money in Switzerland, then possibly keep the wolf from his door for the rest of his life. And you know what is it in Africa? Corruption! All the sitting persons become as rich as possible as they misappropriate the money of their country until they are no longer president.

A king, a traditional leader, he is a leader for life and he wants the wellbeing of his people because, if he does not want the well-being of his people, sooner or later, he will be defeated. A traditional leader thinks of the children of his village, thinks of people, of the children amongst whom he lives with. They come to see him when there is a problem. It is magnificent! Everybody speaks of the good French kings of old, like Henri IV who rendered justice, like good kings thinking of their people: the French were dying of hunger and he said every Frenchman ought to be able to eat a chicken every Sunday.

(..) How can we undertake this African revolution that will federate and create the United States of Africa and, at the same time, reach today existing countries? Unfortunately, in countries inherited from colonization, never the present governments will agree to give up their power in order to build up a federated state because the current power enables them get richer and richer landing their money in Switzerland. Who shall be the initiator? The basis, he people. What do I mean by people? I mean the ethnic groups. And these ethnic groups, what do they have? Leaders, traditional leaders, they can be kings, the heads of village. You all know about it because you have some you know them. They are the only ones that can embrace our Message; only them and by increasing their power, because when you will tell them about the United States of Africa in which their ethnic groups will be directly represented by them or by a village ambassador chosen by themselves, it changes everything. Therefore, this African revolution will not be made by the national powers in place, from these artificial nations created by colonizers. But it will be made by the basis, by the people, by the villages, by the ethnic groups.

The United States of Africa will be an African parliament, where each ethnic group will be represented equally; Tutsi, Hutus, and people from all the regions you know. By doing so, each people regain its dignity and pride to be equal to the others. Do not try to give the present government the idea of creating the United States of Africa. They are already corrupted. For most of them, they are already rotten to the core, except maybe for a few who could have some slightly altruistic ideas and think of their people before thinking of their bank accounts. But, mostly, there is nothing much to expect from them. It is normal; they sit on what has to disappear. We are not masochists: when we sit on a branch we don’t want to cut it by ourselves. So, asking them to become federated in the United States of Africa is like telling them “Here is the saw, you can cut the branch you are sitting on”. They do not want to do that. On the other hand, your traditional leaders, the heads of villages; them, they will climb the tree. And if all the African traditional chiefs get together by region, by country, to say: “We inherited artificial separation by countries from the colonizers, we do not want them anymore and we will get together”.

Then, you have traditional chiefs from the same ethnic group on one side of the border in Burkina Faso, on the other side of the border in Ivory Coast and on another side of the border in Ghana. They will say: "What is this border between us. Why am I under the authority of the President of Ivory Coast and you are under the authority of the President of Burkina Faso? Let us become one, let us create our independent state". And this is how it starts. Africa’s strength comes from the basis. The basis is the people. The people have traditional chiefs, descendants of their ancestors, who are intelligent, who love the village, who love the people. And they do not fill their Swiss bank accounts. They are with you every day of your life. Those in power, who have found artificial posts, those, who do not know sometimes their village (they do not go to villages for fear of getting dirty), do not lie the real African life. A lot of research still need to be done (it is difficult because colonizers did everything to make them disappear) to find back the ethnic groups in the United States of Africa; they can be anywhere. You need to find a place. The OAU was a beautiful dream but in fact was a dream to protect rulers’ interests. This is why it does not make progress. In other words, the Organization of African Unity (OAU) is saying: “We, rulers with our bank accounts in Switzerland to do everything to unite, but not too much, not too fast and in such a way to protect ourselves and our interests first.

If the OAU had been powerful, nobody in Africa would be dying from starvation; it is not the case. Thus, they are powerless and incompetent. The lives: The heads of village, traditional leaders know what it is, they know what it is like losing their children, loosing people in their villages from hunger or sickness. Those ones are in contact with the people. This unity among traditional leaders should be found within the United States of Africa: I assure you, if all traditional leaders of the large African ethnic groups gather in the United States of Africa, they will think of the African people and not of their Switzerland bank accounts. What saddens the ELOHIM and myself, is to see a continent like the African continent with its immeasurable wealth (the wealth of the African continent is colossal) and to see how people are victims of the divisions created by the Western countries.