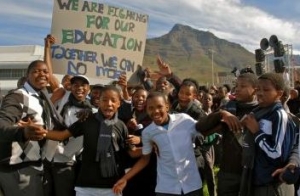 * Strategic Importance of education Program development for the training of African geniuses, August 2001 Africa will escape its misery only by the education. It is better to teach the Africans how to go fishing than to give them some fish. New technologies and Science are the only solution that will take Africa out of the Third World.

All the young Africans, the only important raw material of this Continent, should have an immediate access to education and to Internet. They are in need of computers and Internet more than food. For these technologies which will enable them to transform their underfed country into a rich country. The African countries have an enormous responsibility, vis-à-vis of new and future generations, to insure their education.

* Free education in “Back to Kama”, march 2009 It is important for the success of Kama that education to the highest university level be free ; that’s the key to success. University fees are also the reason of the progressive transformation of the USA into a under developed country.

* Online education Remarks made in Geneva, 6th October 2000 (…) Education is the same. Education is to be completely reconsidered. Since, thanks to the internet, you no longer need to endure the bad teachers. You can have the best teachers in the world who teach everyone at the same time; that's amazing. This is the best teacher, because we deserve the best, who will be teaching to everyone at the same time. The school also; school has not always existed.

So we can well imagine that the children do not go to school but learn at home, at the computer. In the United States, I do not know how it is in France (unfortunately, I 'm sure they are behind) , 70% of the 3 years old children already have a computer ; this is interesting! 3 years old! Imagine what she is doing with it. They are there. In France, I do not know if 70 % of adults have a computer. It progressing and then it will be the Third World into computing and sciences. This is the path it takes.

Remarks made in Brazzaville, 13th December 2001 (…) The message I am bringing... is that your youth must be trained. Not the way Western Powers would like to train you. By making you go through the industrialization process in order to always be a step ahead of you so that they can continue to consider you as developing countries. That is a neo-colonization. I would like all the children in schools to have access to computers, and that must be a priority. Access to the internet should be immediate for the whole population. If you have access to these means of training, you will not be left behind, but you will be at the same level as the other continents.

(...) I came also with my son Ramuel, who is here; he manages a computer science school in Paris. I would like to have Africans trained. He has agreed to help me, to help you have a computer science school. You must jump to be directly at the same level as the other continents; and maybe thanks to your talent, your genius and your freshness you will be ahead of all the other countries. I am saying that this is possible indeed!

Remarks made in Brazzaville, 14th December 2001 (...) This is why I am proud for what I heard recently about this young 12 years old boy from Cote d’Ivoire who has passed his baccalaureate He has been sent to USA for his higher education. I am happy for that but at the same time I am not happy. Because this young man is going to the USA to get the knowledge and this is not right. There exists now a new technology called internet. You might know, if not, I let you know that there is now a university in the USA where you can take all your exams and have your diplomas by internet, no more need to move to go to school. It’s one of the biggest American universities. So what I wish is that all young Africans have internet at home, this way there will be no more need of school or university. You can have it at home, and put all the old school concepts into questioning.

All the children can have computers at very low prices. People think that it takes important infrastructures with satellites at the cost of billions of dollars, to bring internet. There is no more need of satellite, it’s over. No more need also of telephone cables to bring the internet signal. Electricity is necessary, yes. Not all African regions have electricity... Now thanks to new technologies you can also have the electricity locally by solar energy. Each house can be equipped with solar panels which cost is more and more decreasing. Thus, each house will generate its own electricity, not for heat of for cooking, this consume too much electricity, but for the computer. The Americans have got an extraordinary idea to substitute the highly costly satellites.

They use small planes, like the ULM: they are very small cheap planes; when improved they can fly a bit higher, at an altitude of about then thousands meters, and they have on their bellies the same equipments as satellites. They fly almost stand still, and so all the country is covered by the internet signal. There are tree planes of this type. They cost almost nothing by comparison to the cost of a satellite. Countries which cannot afford a satellite could be equipped with such planes and be so immediately at equality with the most advanced states of the planet. I wish to see this accomplished in your country and in all Africa. It exists, it’s not a dream, it’s not future, and this company exists and has already contracts with another underprivileged people, the Indian Americans.

They have just signed some contracts and have already bought some planes to receive internet in their reservations. Internet is a priority and this is another message I am bringing to your President of the Republic: educate the youngsters by internet. Because, thanks to internet, you can immediately have access to all the knowledge of the planet with computers which are not necessarily new, one needs not buy Pentiums 500. With a used Pentium which the Europeans don’t want anymore because they always want new, like an “old” Pentium of three years, four years, five years which is worth almost nothing (computers become quickly obsolete) maybe 20 dollars, 30 dollars ? These computers I want them collected and sent to Africa. This is more important than giving food, because it is enabling those who tomorrow will be capable of being equal to the others, “to learn how to fish”. And this program can be immediate; it can be implemented very quickly. A four year or five year computer allows as much as a new one to have access to today technologies and to adjust to those of tomorrow.

Knowledge is up dated daily and there is no need to have a new computer to have access to it; that’s what is extraordinary. Of course, with these old computers, it may not be possible to have colour animations; no big deal! it is not the most important. The luxury of watching movies in colour will not create the geniuses of tomorrow the Earth needs. Keep the objective of passing this necessity around you. Get it spread in schools, get it spread everywhere in the population.

(...) Be conscious, at all time, that you are beings in a development process - do not stop at a preconceive notion; do not stop at a inferiority complex. This one is what I’ve noticed the most in you, because I have heard so many Africans telling me that the whites are better. Go and probe science, go and probe knowledge, push your children, encourage your children, not to become equal to whites, but rather to become better, because they are capable of that, and because they have the duty of becoming so - and maybe one day, your culture will be so developed that Europeans will come and study in Africa.

* Special Training for geniuses Funding the training of gifted African children, August 2001 We, Raëliens of the world and particularly of Africa and the black Diaspora, ask solemnly the Government of Côte d'Ivoire to grant a scholarship to NIAHI DAGAUD Norton Lewis, 12 year old, so that he can become the youngest African exceptionally gifted of this age to study in the best American universities.

We ask solemnly the Government of Côte d'Ivoire to grant a scholarship to NIAHI DAGAUD Norton Lewis, 12 year old, and who has splendidly just passed the Baccalaureate, to attend the best American universities where he will acquire knowledge which will be beneficial to all his fellow countrymen.

It is necessary that his case becomes a symbol, for Côte d'Ivoire, but mostly for all Africa, of the will of the governments of this continent to lead it directly from the underdevelopment to the 3rd millennium. We also request that a Pan-African foundation be created to allow, every year, the exceptionally gifted children of all countries of Africa, to attend the best American universities. This foundation should be financed by all the African governments to prepare the future elite of this continent. It could be called Educafrique foundation.