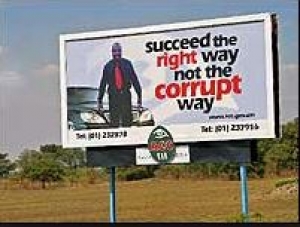 Interviewed by DRTV of Brazzaville, 3rd January 2006 Only, one wonders well, it's as if in politics because are talking about politics, since it is the art of leading the state, the decision-makers are the politicians, in politics one has the impression that one can go from outside with good intentions and as soon as one gets there, there is a detail making everything changes, the African politician could be said as being really bound. It's true, it's true. But that it is because... Africa does not need politicians, it needs statesmen. The difference between a politician and a statesman is that a politician thinks of his (her) wallet, his (her) advantages before thinking of the people; a statesman thinks of his (her) people before thinking of his (her) wallet, his (her) advantages. Unfortunately, the traditional politicians want only to grow rich the most possible, to put their savings in Switzerland, and they do not care at all about the prosperity of the populations. Statesmen, they are rare, they are persons who want the prosperity of the people and who do not accumulate official profits or under the table. That is what Africa needs.

Corruption it is the biggest cancer that is in Africa, it can be found everywhere, I am sure that you see it in the street, this corruption), it is a must to create, that is a part of the project I bring, you know…, do not think that Africa has it and that the rich countries have not had it. In 1930 in Chicago where there was Al Capone and the American mafia who nearly governed the State and who governed the city and the town. And then the American President had the idea to create the Incorruptible. The Incorruptible it is a corps which could not be corrupted and it cleaned the city. All the policemen were paid by the mafia and the gangsters, all the politicians were paid by the gangsters, it was dreadful.

In « Assessment of the 50 year of independence of Kama», interviewed by DRTV of Brazzaville, 14th November 2009 (…) All these people federated into states of Kama, with a new currency, the Afro, it can be called that way or Kamo, as the one and only currency and the removal of all custom borders that will help rid Africa of the greatest African cancer: corruption. Because all that is imported and crosses the borders generates corruption that all of you Africans suffer from every day. By doing away with border customs as Europe did, most of the corruption that plagues Africa will disappear.