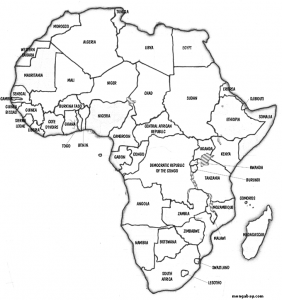 Right now, at the United Nations, there are about 280 countries in the world. Very soon there will be 2,000 or 3,000 - because all the regions will have their independence. It is also another idea I am defending - the creation of the United States of Africa, because Africa must prepare for the upcoming big international fight, the economic and financial fight.

(...) Who has drawn the borders? The colonizers took the map and drew lines: this is for you, the British, this is for you, the Belgians, and this is for us, the French. It didn’t exist before. You had your ethnic groups, which were independent. Things must become like they were before like the people of the Corse in France, and the people of Quebec in Canada, who want to be independent. This way, there will be no more genocide like what you have had between the Hutus and the Tutsis. Why this did happen? Genocide originates with people forced by the colonists to live together in the same country. And, as you know better than me, when an ethnic group comes into power, it crushes the others. Each ethnic group must have its total independence in an African Federation where all the ethnic groups would be represented. A thousand, five hundred, all equally represented. This will be Africa of tomorrow. It is the only possibility you have to repair this injustice of the colonists who came and defined borders for you without any concern of having sometimes separated some groups of people in two. This is stupid, and it creates the tensions you have, leading to the dramas you go through episodically. That is why you have these genocides. They are so awful. One could think that Africans are violent. No. If you force two rats to live together in a cage, with one in command, the other rat will be unhappy, particularly if the cage is small. Each must have its independence, its space, its autonomy. You must have an African government of the United States of Africa. The United States of Africa would be economically as powerful (if not more powerful) as the United States of America, because you have all the raw materials, and this should allow you, with a single currency, to become also scientifically equal to the Westerners. This is what I wish for you, this is what I hope to see.

Africa to Africains, January 2003 (...) Finally, let us remind that if in a country, any part is in disagreement with the rest, secession is the best non violent solution, even if a referendum with the concerned populations has to take place. The creation of this new State would allow each part to live in peace, as it has been with the creation of Pakistan in the northwest of India at the departure of the English colonizers. Because anyway, artificial borders defined by colonizing powers are totally unrealistic and must be abandoned by the creation of new states, respecting ethnic and cultural differences, united within a confederacy called the United States of Africa with a single currency: the Afro as I explain it in a previous text. But the former colonizing powers wish to keep the big artificial states which they created, the policy of which they can easily control, directly or indirectly, in order to continue plundering them through multinational firms, using corruption widely, as the recent French politicofinancial scandals have proven it. Africa must belong to the Africans, in particular the resources which continue to be plundered by the former colonial powers. Africa to the Africans! Peace and brotherhood to the people of Côte d'Ivoire who must find by non violent means such as those explained above, a solution of the current drama.

(...) African immigrants have long enough been victims of French exploitation and heard too often "France for the French"... it is time for them to answer "Africa for Africans"! Robert Mugabe, the courageous African leader, recently showed the path. African states have to unite in a federation called the United States of Africa that will know how to put the old colonial powers back in their place when they interfere in African affairs, those old colonial powers that conserve still today their paternalistic attitudes and insulting superiority complexes. in « Bilan des 50 ans d’indépendance des pays de Kama », interview accordée à DRTV de Brazzaville le 14 novembre 2009.

(…) I have a project that is in process of being put in place: The United States or rather, the United Kingdom of Africa because it is necessary to go back to the ethnic groups, to the original ethnic nations federated into a united Africa - the same way Europeans do it in a united Europe - a united Africa, a united Kama, the united Kingdom of Kama And all the puppets put in place by Europe, leading large states with presidents and ministers, are to disappear, and be replaced by the original kingdoms with the kings and ministers who used to take care of their peoples, of their ethnic groups. All these people federated into states of Kama.