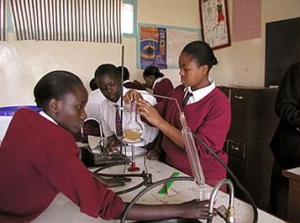 Intervewed by DRTV of Brazzaville, 3rd January 2006 Prophet, Africa, the future of Africa, as you know it, is the youth, so it is the students who, tomorrow will take the place of those who lead us today, is it not. Then, what messages do you send to the students since you are here, here in Congo and in Africa? Study, study, study! Education is the key to get out of the problem in Africa. It is the key to make this continent the richest in the world. It is only that.

I would like to insist: science is the love. If a young person has a sort of spiritual appeal and wants to become a catholic priest, he does not give any love. What do priests do: they come and see the children who starve to death, they give the extreme-unction and they bury them? A scientist, he will save them. So what is more love: To make some tricks of ‘’grigri’’ on the one who is dead or to prevent him (her) from dying? Obviously love, is to save lives; love is to make it so that your grandmother, your grandfather you love, instead of dying at fifty years, lives up to 120 years. Which is logical, we are made to live up to 120 years. So that is the love. So to destroy diseases, to prevent that thousands of young people die every day in Africa of AIDS, by finding medicines, all this is love and it is science. And even those who are against science such as the Pope, (well, he has 24 doctors, the Pope), that means that even he does not say: "no, no, I do not want science; it is god who healed me; he makes a call to 24 doctors; that shows the hypocrisy of the system. And these same persons want that prayers and blessings be what save the world. No, it is science, only science!

So I say to the young Africans: study, if possible science, because science is love, it is the most beautiful expression of love. Thank you very much Prophet. These young African students asked if you believe in them, if they have the capacity soon, because they listened to you in the previous broadcast, soon not only to do as the others but better than the Whites. You believe so in these young people; are you sure that, through the studies they are doing, they can, soon, bring excellence? Obviously I would say better than Whites because there is a spirit. You insist on that?

I insist on that. Because there is an African spirit, an African purity which makes that certain discoveries… We are all different, there is no superiority. But the Yellows are different from the Whites; the Blacks are different from the Yellows. We all have specificities in the way our brains work. Which give us the capacity to discover things, to look at things as a diamond under different facets? And it is this complementarity of human races, which makes the richness of the humanity like a rainbow of colours. And it is magnificent, a rainbow and if there was only a colour, it would not be beautiful. So, it is this variety of colour which gives the capacity. I will give you some examples. Here, you have a projector which allows to be seen, it is an electric lamp. The lamp was invented by Mr. Edison. He made 5,000 attempts, he persisted. But the filament which allows people to light up their homes with light bulbs, I would like that all the people who are watching us, look at their electric light bulb; the filament was invented by a Black.

When you take the elevator in a hotel, it is the Black who invented the first elevator. Not only there is no inferiority but the Blacks are capable of inventing things of which the others did not think. So, there is not only to do as well as; I think that the young African scientists will be capable of making better than what exists.